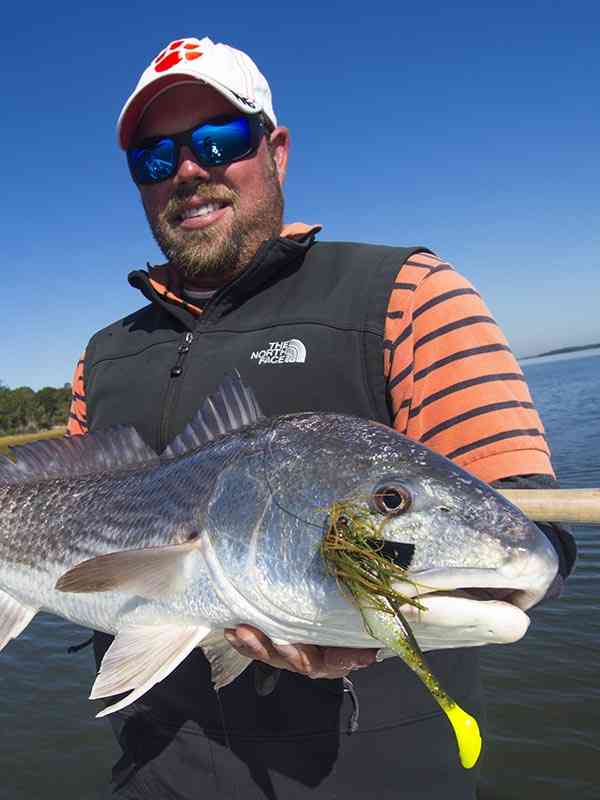 This undeveloped stretch of coastline is one of the largest on the eastern seaboard with over 60 Miles of uninhabited beaches and barrier islands. Due to its isolation, this fishery is relatively unpressured which makes for some phenomenal fishing year around. On an average day in the peak fishing season, you could expect to only see five other boats on the water. The Mullet Run in September will ignite a Tarpon feeding frenzy before they migrate back south and Surf Fishing in the late Fall are the main events for this area. Not to be overlooked, World class Redfishing can happen year around on the flats and back waters and the Speckled Trout Population is thriving in the estuaries in and around Bulls Bay and Cape Romain.

Bulls Bay is large shallow body of water that stretches almost 6 miles to the south of Cape Romain. This area is a hot spot for tarpon fishing, trout, and bull redfish. Fishing in Bulls Bay can be very productive but anglers who are not familiar with Bulls Bay should be aware of the many hazards this area can present.

The two lighthouses located on Lighthouse Island have a very fascinating history. The lighthouse Keeper in the early 1900s was a Norwegian who enjoyed the isolation of the desolate island. His wife, however, did not share his enthusiasm. She was awfully homesick and begged her husband to take an extended trip to Norway to visit family and friends. Her husband would hear nothing of it, and the topic was the cause of many arguments between the couple. Finally, she told him she was leaving for Norway and out of rage, the Keeper grabbed a kitchen knife and cut short his wife’s travel plans and her life. When asked how his wife had died, the Keeper said that his wife had committed suicide. The truth was not known until the Keeper confessed to the killing on his deathbed.

Best known for its shrimping fleet and seafood industries, McClellanville Village began in the late 1860s when local plantation owners A.J. McClellan and R.T. Morrison sold lots in the vicinity of Jeremy Creek to planters of the Santee Delta, who sought relief from summer fevers. The first store opened soon after the Civil War, and the village became the social and economic center for a wide area that produced timber, rice, cotton, naval stores, and seafood.
In 1989 the town was devastated by the full brunt of Hurricane Hugo which destroyed homes, downed century old oaks, deposited shrimp boats in front yards, and otherwise altered much of the picturesque character of this historic fishing village. Residents taking refuge in the local high school, a designated storm shelter, were surprised by a storm surge which threatened to drown the refugees. Helping one another in complete darkness, they managed to crawl into a space above the false ceilings of the building and, fortunately, none was lost.
Contact us today for schedule your Cape Romain Fishing Charters.
For lodging information: www.mcclellanvillerentals.com.

Cape Romain and Bulls Bay are a tarpon hot spot. This unspoiled, undeveloped stretch of coastline is easy to access from McClellanville, Buck Hall Landing, or Georgetown. Tarpon begin showing up around Cape Romain in late May and will stay until October. Tarpon can be caught along the beaches, inlets, and sandbars using heavy tackle with live or artificial baits.

Redfish are the primary target for fly fisherman in Cape Romain and Bulls Bay which can be caught year around. Sight Fishing for redfish is best on the flood tides during the Summer and early Fall when they can been seen tailing on shallow grass flats. When the weather cools off, the water turns gin-clear and redfish begin to school up in shallow water which makes sighfishing for redfish a blast!

Redfish and Speckled Trout are two of South Carolina’s most abundant game fish and can be caught in nearly every body of water that holds salinity. With their great numbers and ferocious fighting reputation, Redfish and Trout are the primary target on most Cape Romain fishing charters. Fishing with light tackle spinning outfits and Fly Fishing equipment.
RESERVE A FISHING CHARTER 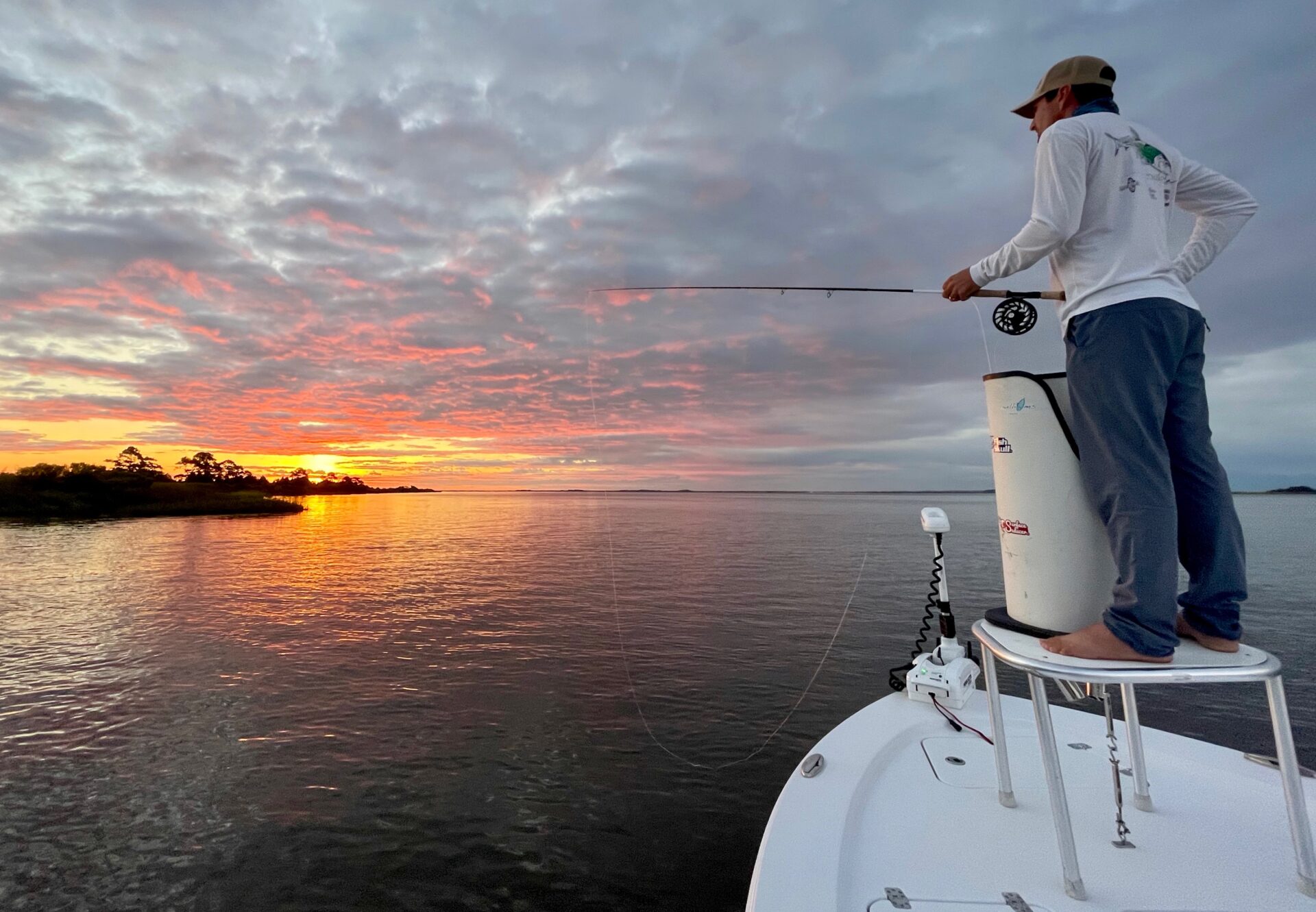 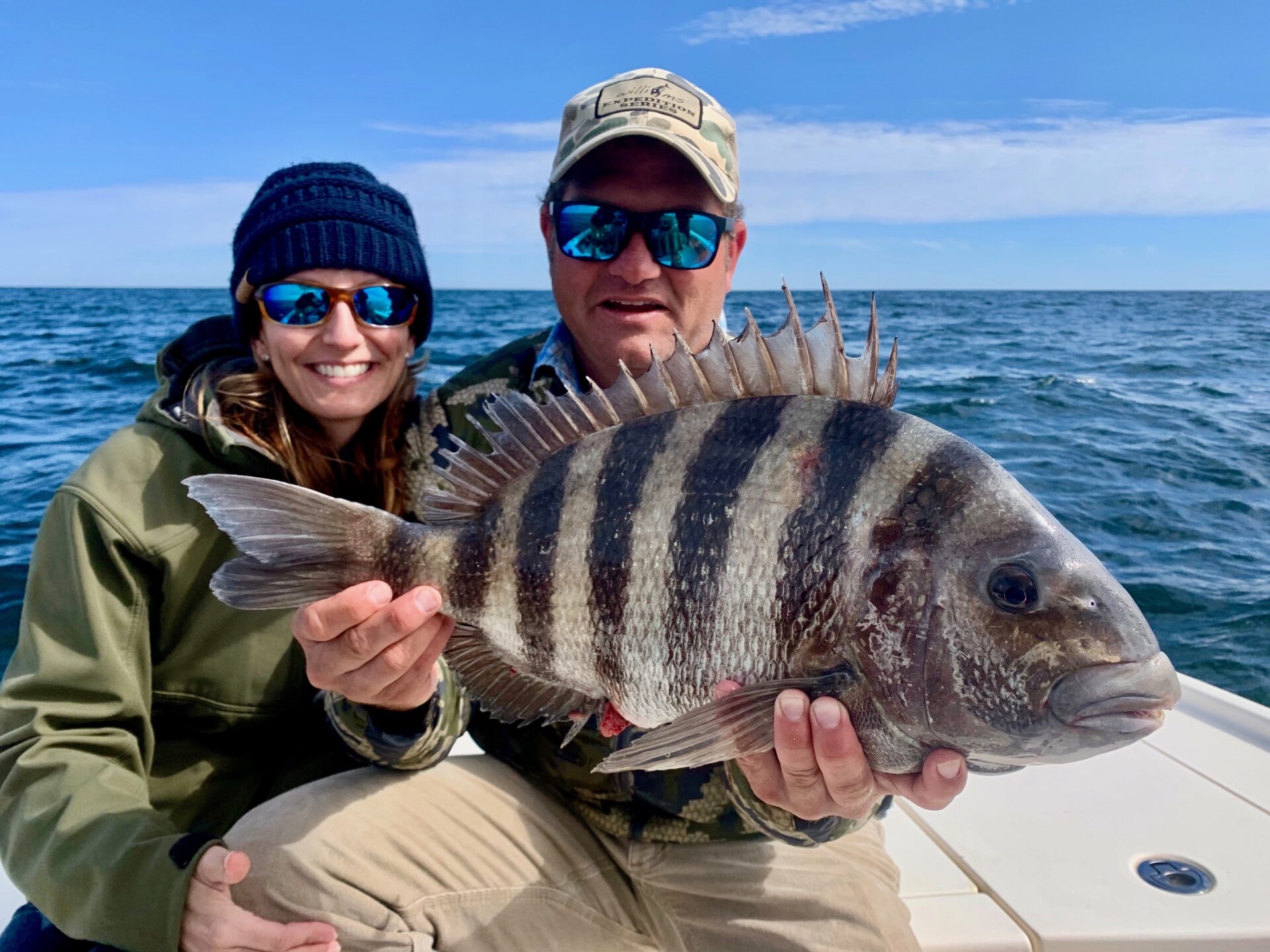 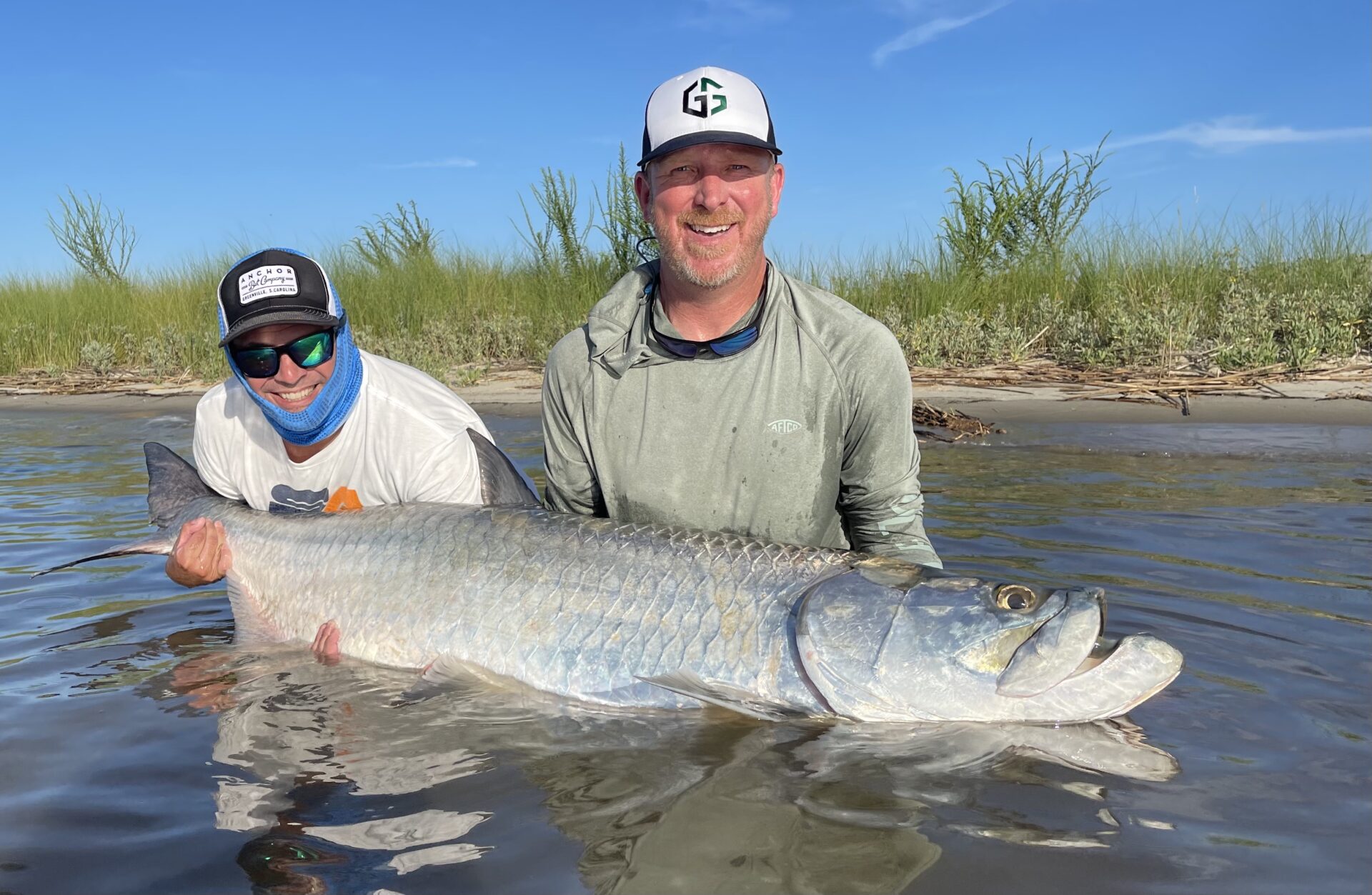 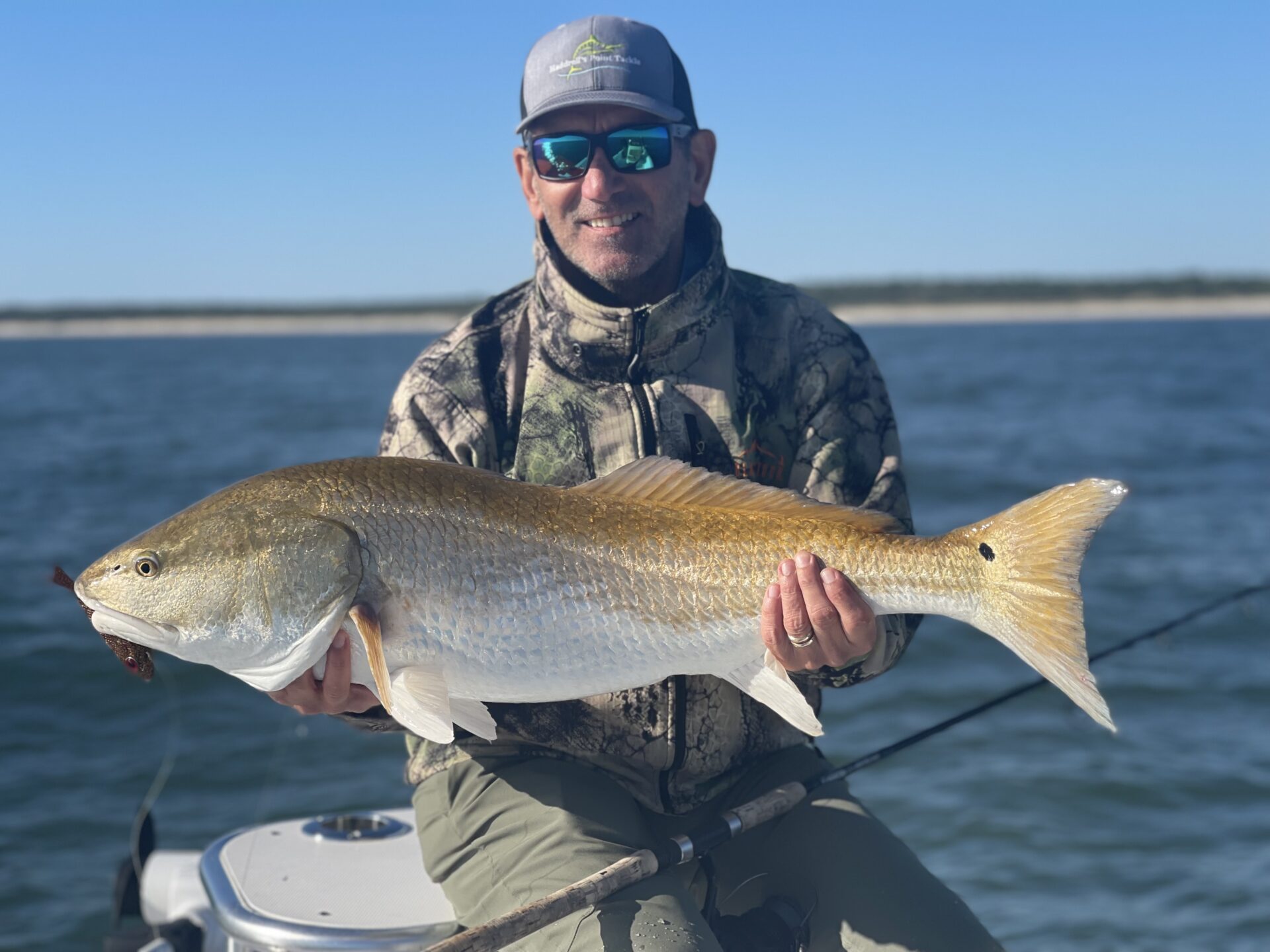